A Microscope on a Big World

A late-blooming success story with a new Ph.D., Eric Dexter is off to Switzerland in search of new insights about aquatic invasive species.

As a high school dropout, Eric Dexter wasn’t a likely candidate to earn a doctorate and move to Switzerland as a research scientist. In fact, he was 26 before he discovered research at all.

In his Florida high school, he said, “I was among the worst students at a very good school. Things weren’t going well at home, and I had vague plans of making it as a musician.” He dropped out but eventually completed his diploma through an adult program.

In his mid-20s, after a series of jobs that included massage therapy, he moved to Oregon and decided to pursue acupuncture. Needing some remedial classes and prerequisites, he enrolled at Portland Community College at age 25. He also took courses in college survival skills and applying for scholarships, which helped Dexter discover a previously unknown talent and passion for learning.

At the end of the year, Dexter received a research internship to study interactions between native and invasive honeybees in Ghana. The world opened up for him. “That research internship changed my focus,” he said. “I forgot about acupuncture and started pursuing core science classes.”

He transferred to Portland State University for his bachelor’s degree, receiving international research internships every summer. He spent a year in New Zealand on an exchange program. “No one from my family had ever left the country before, and when I traveled to West Africa to do research, I realized there’s a big world of science out there,” he said.

After Dexter enrolled at WSU Vancouver in 2012 for his master’s degree, the opportunities for international study and research expanded. He received a Fulbright to study in Switzerland in 2014/15. He had been working in the Aquatic Ecology Lab directed by his advisor, Professor Steve Bollens, and Associate Professor Gretchen Rollwagen-Bollens at WSU Vancouver, but he wanted training in something the lab does not study— population genetics. He found leading scientists in the field in Switzerland. Coincidentally, he liked Switzerland, because he and his wife, Claire, had eloped there to marry in 2008.

After studying there for a year, he returned to Vancouver to finish his Ph.D. in environmental and natural resource sciences.

Dexter brought his research specimens to Lausanne, Switzerland and returned to Vancouver with the data to complete the analysis, which was published as an article, “A genetic reconstruction of the invasion of the calanoid copepod Psuedodiaptomus inopinus across the North American Pacific Coast.” It appeared in the journal Biological Invasions in 2018 and became a chapter in his dissertation. One of his collaborators in Switzerland, Séverine Vuilleumier, joined his dissertation committee.

“We’re looking for something in evolutionary biology and genetics which has never been seen before.”

After graduating with his Ph.D. in May, Dexter left for a European Commission–funded Marie Curie postdoc fellowship at the University of Basel in Switzerland. He works with Dieter Ebert, a professor at the University of Basel, on the co-evolution between hosts and parasites or the pathogens that affect them. His wife and 8-year-old son, Redmond, are joining him in Switzerland.

“The dissertation work focuses on the way invasive zooplankton species impact water bodies around the Pacific Northwest, and examines some of the mechanisms that might be behind their establishment and spread across the region,” Dexter said. “The next work is a little shift in direction, using similar species but this time in a laboratory setting and with wild populations as well. We are going to test some fundamental predictions of co-evolutionary theory between organisms and the pathogens that affect them. I think we might find a really clear signal in the genomes of the species we’re studying.”

With the use of genetic methodology, the research is groundbreaking. “We’re looking for something in evolutionary biology and genetics which has never been seen before,” he said.

Research on the razor’s edge

Dexter’s international interests are about much more than travel. In an article for Science magazine in June 2017, he described the frustrations of scientific funding in the United States. For example, about four years ago, he was told he’d received a three-year grant from the U.S. Environmental Protection Agency, but havoc in the agency left no one in charge and the funding uncertain for Dexter and the others in his program.

After an 11-month delay, he and his fellow awardees finally learned they would receive the full three years of funding, but the program would no longer accept applications. In Science, he wrote that while he was “extraordinarily grateful” for the EPA’s support, he was also concerned about the agency’s future.

“Beyond that, I am worried about my nation’s scientific institutions as a whole,” Dexter wrote. “Scientists in the United States face a shortage of tenure-track faculty jobs and fierce competition for a shrinking pool of grants. These dimming prospects reflect decades of underinvestment in the sciences. … We are all doing research on a razor’s edge.”

Dexter’s sharp focus and perseverance have helped him get ahead in a competitive environment, and WSU Vancouver has been good to him, too. The university has given him grants and awards for professional development, travel and scholarships.

In addition, he said, “I’ve had great faculty and easy access to faculty whenever I have questions. The campus is beautiful, there are incredible support staff in my department, and my advisor has been a great resource.” ■

Northwest Crimson & Gray is the semiannual magazine of WSU Vancouver, produced to highlight the WSU Vancouver community and higher education in Southwest Washington. 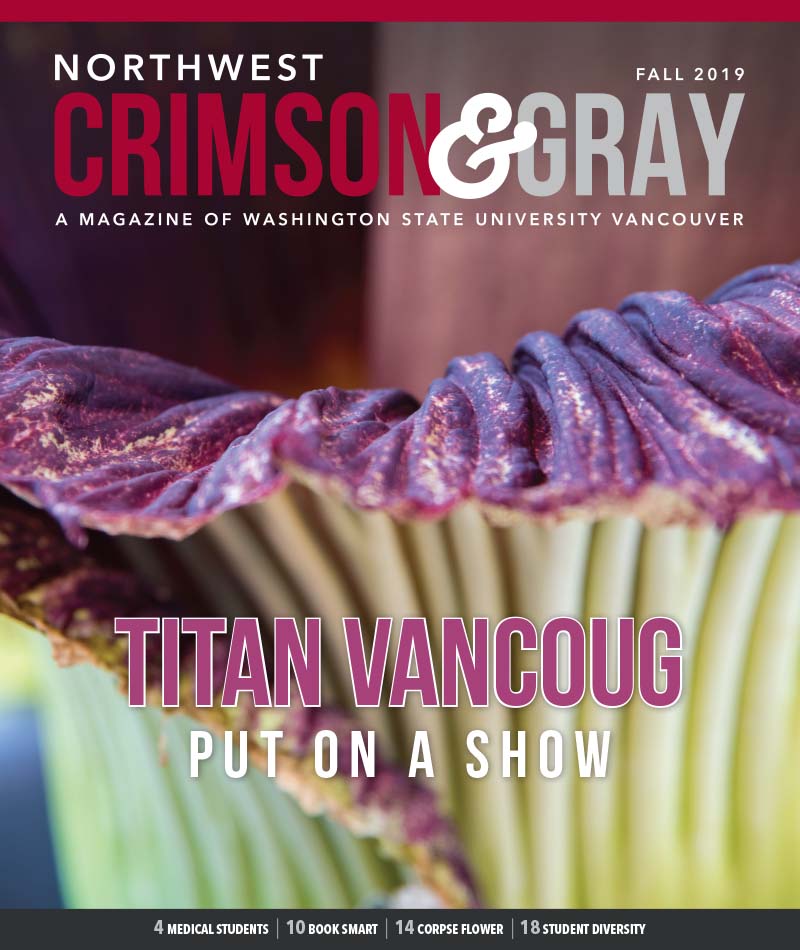