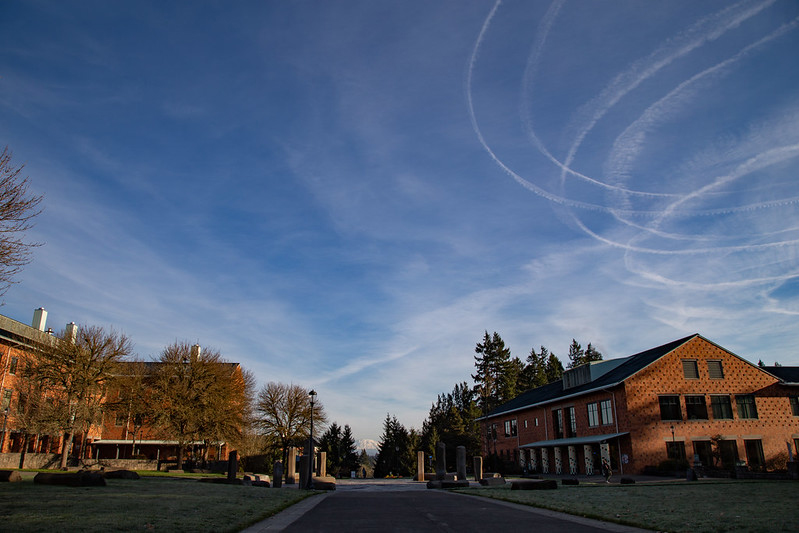 Each semester, WSU Vancouver brings about 100 community members to campus as adjunct faculty. They help connect the campus to the community by teaching a wide- ranging set of courses, such as calculus labs, early literacy and career development. On top of that, they typically have full-time jobs and other pursuits.

“Our temporary faculty have expertise that we don’t have on our campus, and they come and share that expertise with our students,” said Christine Portfors, vice chancellor for research. “They are willing to dedicate time to teaching in their field of expertise. And because they have outside jobs, they can impart that industry knowledge to the students, which is beneficial for the students’ education.”

Departments looking for someone to teach a specific class may recruit a person they know or may advertise. Many adjuncts are graduates of WSU Vancouver. Some continue teaching for years. Meet four adjunct faculty members teaching at WSU Vancouver this spring.

As founder and director of the nonprofit PDXWildlife and a widely cited expert on giant pandas, Meghan Martin would seem to have her hands full already. But she loves teaching, and it helps her fulfill her mission to bring the kind of work she does to a larger audience and to encourage students to learn about animal behavior from an applied perspective.

Martin taught animal behavior at WSU Vancouver in fall 2021 and is teaching human anatomy and physiology this spring. Responding to an ad for an adjunct, she told the colleagues who interviewed her that she would be continuing her independent research but would like to feed it into the program at WSU Vancouver.

“I taught a lot in graduate school and as a postdoc,” she said. “And I love mentoring.” Martin earned her Ph.D. at Portland State University and did postdoctoral research with the China Conservation and Research Centre for the Giant Panda and with the San Diego Zoo.

She finds additional benefits to having an academic connection. For one thing, funders value it. “I can take advantage of networking at the university too,” Martin said. “It’s nice to have those connections. I love being around other academics and being able to exchange ideas. And with younger students, you get more fresh ideas and new excitement over topics they’re just getting introduced to.”

The upper-level animal behavior class is an example of how she likes to teach. The class had 22 students, with small lectures and two labs of 11 students each. “We developed a project as a class," she said. "We pick a species and think of an idea that needs to be solved and what we can research and how we can contribute to the science for that species.” They write a miniproposal, as for a grant, perform research, and each team gets a section of the research to analyze. The data collected then goes into a paper.

“The students get the opportunity to learn how I would go about addressing a problem,” Martin said. “So when it comes to a conservation breeding program, for example, we work within the confines of an institution. If we can only do one hour of behavioral observation today, those real constraints from the real world exist in the university setting too.”

Each week, students entering the Masters in Teaching program travel to Camas to observe project-based learning in grades 6 – 12 at Odyssey Middle School and Discovery High School. Rob Mattson, library media specialist for both schools, teaches the WSU Vancouver students about PBL, a teaching method in which students learn by engaging in real-world projects. Students do research to solve a problem and then communicate their findings by creating a project or presentation, often a video.

Mattson has been an adjunct teacher since 2012. He used to teach on the WSU Vancouver campus, but he and his WSU Vancouver colleague, Rick Sawyer, professor of education, agreed that students might be better off observing PBL in practice rather than studying it in theory. “They get experience from day one on what a nontraditional project-based school can look like,” Mattson said.

“Rob wears three hats,” Sawyer noted. “He teaches our graduate-level technology course at the middle school in the teacher preparation program, he teaches sixth- grade classes at Odyssey Middle School (which our teaching interns observe) and he co-directs the school-university partnership.”

Mattson appreciates getting to know WSU Vancouver students. “I like to work smarter, not harder,” he said, “so in a lot of ways having graduate students here, while it takes time, we find ways to use what they do. Last April they prepared a curriculum taught to my classes. That freed me up, and they did some of the teaching.”

And, he added, “It’s not just the graduate students who benefit. A lot of times we have them pair up with media students here who may benefit from extra adult contact. Our kids get to know those adults and interact with them in a different way than with other teachers.” Two WSU Vancouver graduates now teach in Camas.

Mattson has always felt close ties to WSU Vancouver. An Idaho native, he went through the MIT elementary program himself in 2005/06. “The friendships I formed at WSU Vancouver were the first I had in this region,” Mattson said. Mattson explained the program’s long- term goal: “We hope when [the students] go out to teach, some of what they’ve learned will ripple out and maybe help impact how education is done throughout our region.”

On Jan. 31, 2006, Joan Caley retired after a 33-year career at the Veterans Administration. The following week, she started at WSU Vancouver. She has been here ever since. “I’m pretty full up, but I’m that kind of person,” she said. “I’ve got to be busy.”

Having done a post-master’s nurse educator certificate at WSU Vancouver, Caley was already well known to the department when she was recruited. In fact, she was involved with WSU Vancouver even before the school opened. “The nurses’ association and I did a lot of advocacy getting a nursing program started in Vancouver,” Caley said.

She usually teaches two courses a term in the RN-BSN program: Nursing 465, Application of Population Health Principles, and 495, the capstone class. She has been on the Nursing Advisory Board since the beginning as well—just one of many community roles she serves. She is on a handful of nonprofit boards.

“She is very, very well known in the community for her work with individuals who are not stably housed,” said Linda Eddy, professor and associate dean of the College of Nursing.

“I’m a community health clinical nurse specialist,” Caley said, “and my forte is working in the community.” A nurse for 50 years herself, she has two daughters who are also nurses and graduates of WSU Vancouver.

Caley is proud to bring “real-life community and leadership experience to the program,” she said. “I have broad experience at the VA at the national level, and in professional nursing organizations at the local and national level. I enjoy weaving my nursing experience into the courses I teach.”

She loves teaching as an adjunct—in fact, she is an adjunct at the University of Portland as well. At WSU Vancouver, she said, “I am part of the team, and I love it. What I suggest is welcomed and sought. That’s what makes me love teaching at WSU Vancouver. It makes me never want to stop.”

There is one unusual thing about Caley’s love affair with WSU Vancouver: She is a 1972 graduate of the University of Washington School of Nursing. “The crazy thing about this is that I am actually a Husky,” she said.

In his full-time job, Jon Lewis is director of software R&D at HP Inc. in Vancouver. Since spring 2021, he has been teaching Mechanical Engineering 405, Introduction to Microcontrollers, at WSU Vancouver each semester.

He is also instrumental in HP’s four-year partnership with the computer science department’s capstone program, directing student teams who spend a semester doing a project at HP. “Jon is also engaged in the career development workshops and advises our students on resume building, interview skills” and other job-hunting tools, said Xinghui Zhao, director of engineering and computer science and associate professor of computer science. “On behalf of HP, he supported our students by donating new HP laptops for student use.”

Lewis was well known at WSU Vancouver before he started teaching. In a meeting about the capstone work, he asked about guest lecturing. “A few months later, they called and asked if I’d be interested in teaching a class,” Lewis said.

He cited two reasons for adding this work on top of his regular job. “One is personal to me,” he said. “Teaching is a passion.” As a high school student he had seriously considered a teaching career. “The second thing is more professional,” Lewis added. “It’s a great mechanism to evangelize about HP Vancouver, and also a great recruiting tool.”

In the capstone program, students learn best practices while showing the company what they can do and how they’d fit in as employees. When Lewis learned that more than 90% of WSU Vancouver students stay in the area, he knew it was important to get involved. “As HP is a big engineering company in Clark County, it’s a good marriage,” Lewis said.

While his first semester of teaching was virtual, the last two have been in person and more satisfactory to Lewis. “I laugh at the fact that when I do my lectures recorded, they might be 20 minutes, but when they’re live, they’re well over an hour, because there’s a lot more engagement and interaction.”

Lewis has felt welcomed by the faculty, naming Zhao and Dave Kim, professor and coordinator of mechanical engineering, for the level of support that makes it possible for him to manage teaching on top of a day job.

“This adjunct experience and capstone have allowed me to fulfill my passion for teaching while giving back to the community,” Lewis said. “Giving back is important for me and the company I work for. This is how the future of engineering and technology is going to advance.”