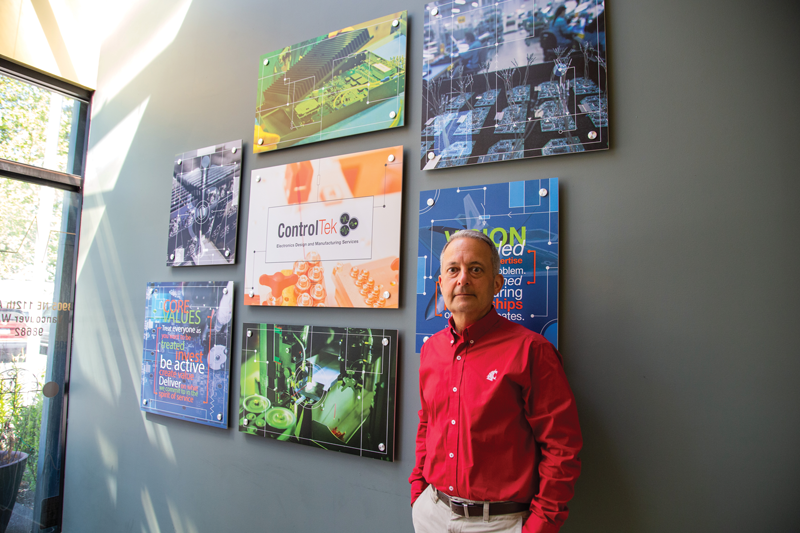 President of ControlTek in Vancouver, Andy LaFrazia says WSU Vancouver made a significant impact on his education, career and life.

Andy LaFrazia began his working life as a civil engineer for the Air Force. He served on active duty from 1988 through 1995. Around the time he left active duty, his father, George, was getting ready to retire from the family business, ControlTek, which he had founded in Vancouver in 1971. ControlTek designs and manufactures custom electronic modules for companies in multiple industries, such as aerospace, defense, industrial and medical devices.

At first, Andy said no. His dad persuaded him to try it for a year. It has now been 27 years. When George retired in 2000, Andy became president.

This year, Andy LaFrazia was recognized with WSU Vancouver’s Notable Alumni Award. He is honored for extensive service with the Business Growth Mentor and Analysis Program.

A capstone course for students in the Carson College of Business, Business Growth MAP is a student consultancy that pairs student teams with small businesses and nonprofits to help them improve and grow. Volunteer mentors such as LaFrazia work with the student teams and their faculty supervisors. Besides mentoring for the past seven years, LaFrazia is a member of the Business Growth MAP Advisory Board and the Carson College of Business Advisory Board.

The connection is made

“When I joined ControlTek, the company was fairly small, and it opened my eyes to business,” Andy LaFrazia said. He sat with his dad learning the business for a couple of years, only to realize how much he still didn’t know. He had a bachelor’s degree in engineering from Oregon State University, but he wanted a business degree too. Then he discovered WSU Vancouver’s MBA program.

“WSU Vancouver was pretty new then,” he recalled. His professors included Joe and Jane Cote (Jane Cote nominated him for the award) and Tom Tripp. LaFrazia earned his MBA in 1999 and was named the Distinguished Business Graduate.

LaFrazia was a member of the Air Force Reserves at the time, having joined following his active duty. In 2007 – 2008 he was mobilized and deployed to Iraq as Air Force Site Commander for heavy construction at Al Asad Airbase. He continued to serve in the Reserves, traveling to Joint Base Lewis-McChord in Washington one weekend a month, until 2017. He retired as a lieutenant colonel and commander of the 446th Civil Engineer Squadron.

“WSU Vancouver made a significant impact on my education, career and life.”

Meanwhile, he had also started volunteering at WSU Vancouver—first for a short-lived mentoring program for small business owners, and then for Business Growth MAP. He has been a volunteer since 2014 and on the advisory board since 2019. He also chaired the Business Growth MAP board’s strategic planning efforts. In addition, his company has sponsored and served as technical mentor for capstone projects for students in the School of Engineering and Computer Science.

“WSU Vancouver made a significant impact on my education, career and life.” LaFrazia said. Thanks to adding business knowledge to his engineer brain, “I’ve been able to help build my family business into a $20 million-plus company employing more than 110 personnel. The education I received has been a bedrock in my efforts to guide and grow the company.”

Giving back to students is another big part of his satisfaction. “Giving students a broader perspective of business is really helpful to them,” he said. Giving back to local businesses through the program is rewarding too. “I’m a real big proponent of giving back,” he said. “And more growth comes from small businesses than large, so if we can focus on growing our base, that will help our local economy.”

Andy LaFrazia comes by this philosophy naturally. “I think I learned a lot of my business philosophy from my father,” he said. George instilled his ideals into ControlTek, which emphasizes a positive company culture that values its employees as well as its customers, and that paraphrases the Golden Rule as its main core value: “Treat everyone as you want to be treated.” In retirement, George LaFrazia and his wife, Donna, are active in several charitable organizations in the Vancouver area, including their church, St. Joseph Catholic Church. Andy and his wife, Tammy, also volunteer with the church and community organizations.

The family is Coug through and through. Along with Andy, his wife, son and daughter-in-law are also WSU graduates. His son, Nick, who earned his Carson College of Business Management Information System degree from WSU Pullman (2016), is an Air Force pilot. Nick’s wife Nicole (2018) is a proud Coug graduate, and they are hoping their daughter, and Andy and Tammy’s first grandchild, will be a future Coug. Andy’s daughter, Hannah, graduated from Arizona State University and lives in Arizona.

LaFrazia is an articulate advocate for his alma mater. As he said, “I’m still surprised at the number of people who don’t know of all the great opportunities, educational programs and outstanding staff at WSU Vancouver.”