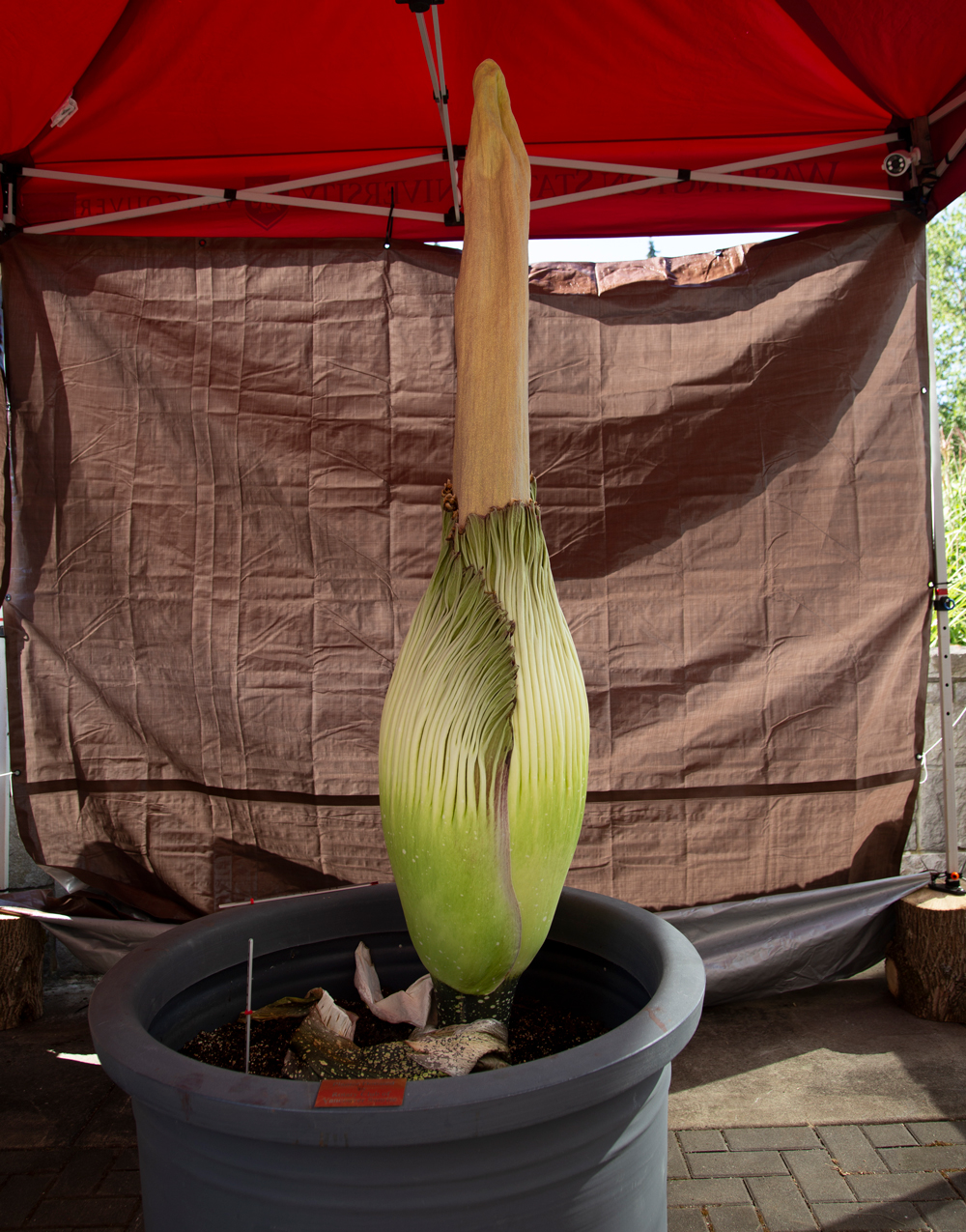 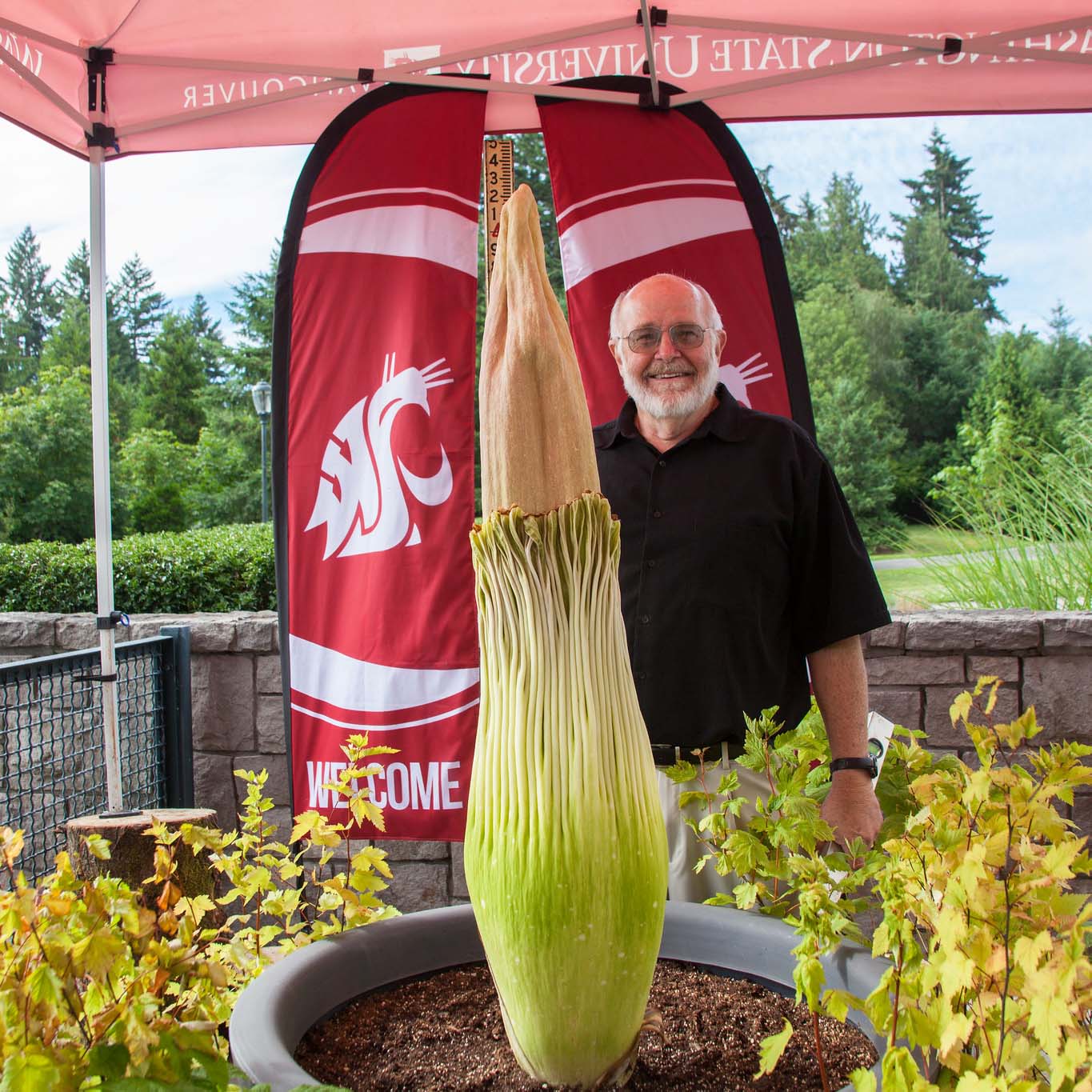 Titan VanCoug has been raised by Associate Professor of Molecular Biosciences Steve Sylvester. He planted a seed from the University of Wisconsin-Madison’s titan arum plant, affectionately named Big Bucky, in 2002. He cultivated it in a pot on his desk until it grew too large to contain in such a small space. It has grown in a stairwell in WSU Vancouver’s Science and Engineering Building for some time.

On June 1, Titan VanCoug’s first bloom started to appear. By July 1, Titan VanCoug had grown to 25.5 inches tall. It has grown about 2 inches per day leading up to its bloom.

A late bloomer at 17, Titan VanCoug’s first bloom was most likely delayed because its corm (tuber) cloned itself. Corpse flowers put up only one leaf at a time. The pot that contains Titan VanCoug has had as many as four leaves showing at once.

Sylvester has arranged to receive pollen from The Royal Botanic Garden Edinburgh. He hopes to pollinate Titan VanCoug so that it will develop seeds he can share with other universities and conservatories.

For more than 35 years, Sylvester has taught a variety of science classes related to the environment and health. His research works to identify molecules in the environment that may alter reproductive processes in plants and animals, including trying to identify pheromones in an introduced predatory snail that costs the oyster industry millions of dollars per year. Currently Sylvester is examining the changes in gene expression and proteins that can lead to cancer caused by a contaminant present in low levels of some desalinated drinking water. He hopes to help the EPA and WHO set the safest levels for life-long human consumption. Cultivating Titan VanCoug, while not part of Sylvester’s formal research agenda, has been an interesting pursuit.

Where does the titan arum come from?

It is native to the limestone hills of Sumatra, Indonesia’s rainforests, the only place in the world where it naturally grows.

What makes the titan arum so special?

It is among the world’s largest and rarest flowering structures. The bloom of a titan arum is typically 6 to 8 feet tall (the largest on record was just over 10 feet tall). It emits a foul odor similar to that of rotting flesh, thus the name corpse flower. These plants are uncommon in cultivation and blooms are even rarer—typically after 7 to 10 years of growth and just once every 4 or so years afterward throughout a 40-year expected lifespan. The plant also produces the largest leaf in the world, reaching 15 to 20 feet.

What is the lifecycle of titan arum?

After the seed germinates, a small leaf grows from an underground tuber. After 12 – 18 months, the leaf dies back and the plant goes into dormancy for 3 – 6 months. When a new bud appears, the emerging leaf will be larger than the previous leaf. Meanwhile, the tuber below ground continues to grow, too. The plant goes through many dormancy/leaf cycles throughout its life. On the rare occasion, instead of a leaf emerging from the dormant tuber, a bloom emerges instead.

What’s with the stink?

The odor is meant to attract pollinators and help ensure the continuation of the species. Dung beetles, flesh flies and other carnivorous insects that typically eat dead flesh or lay their eggs in rotting meat are attracted to the titan arum. In Sumatra, the bloom can be located by smell from up to 50 yards away. Sometimes it is so strong people can’t stand to be near it.

How long will it remain in bloom?

What happens after it blooms?

If the flower has successfully pollinated, the surrounding spathe eventually falls off, exposing maturing seeds. When ripe, the seeds turn a bright orange-red, which attracts birds that pick them, eat the flesh and discard the "pit" or seed. In this way, the plant is dispersed.

What other plants is titan arum related to?

Titan arum is a member of the family araceae, the aroids or arum plants. Other members of this family are the anthuriums, calla lilies, philodendrons and dieffenbachia.