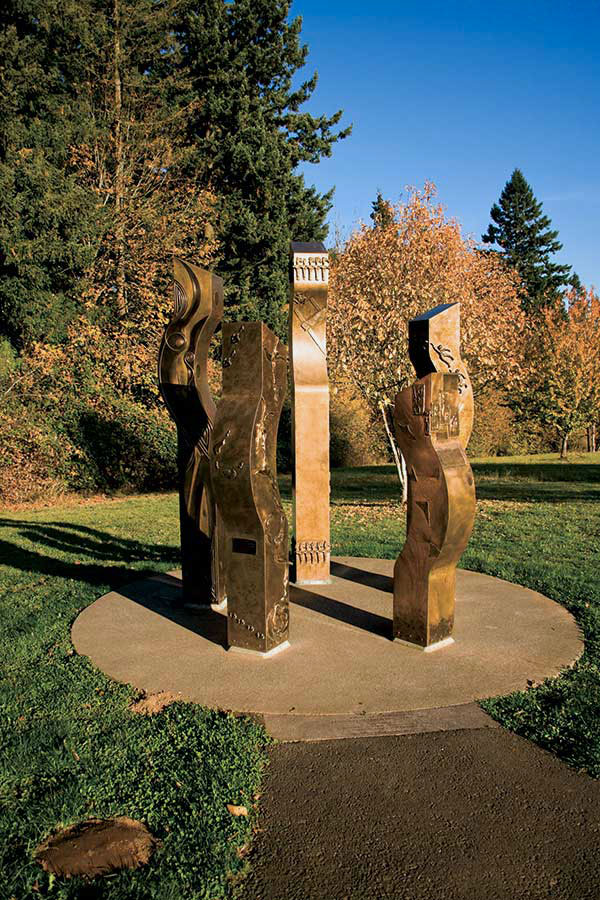 Created by a local group of artists called Women Who Weld, this sculpture features bronze pillars that depict themes in Lori Irving's life. These themes include Teaching/Mentoring; Feminism; Positive Body Image; Community; and Laughter and Dance. Those who knew Lori will recognize these themes as reflections of Lori's personality and work.

The pillars also signify simplicity and strength - standing tall on solid ground which embodies Lori's life and the fulfillment she reached in her 38 years.

Lori Irving joined the faculty at Washington State University Vancouver in 1993. In her eight years at WSU, Lori excelled in all aspects of her job—teaching, research, and community service.

A dedicated teacher, researcher, and advocate, she was the only WSU Vancouver faculty member to receive the Students' Award for Teaching Excellence twice.

She was also widely published in research journals and served as founder and coordinator of the Columbia River Eating Disorder Network.

These are only a few of Lori's many accomplishments. In retrospect, the accomplishment that would have gratified her most was the positive impact she had on the lives of so many people. Students, colleagues, and friends gravitated to and were inspired by Lori.

Lori's untimely death on April 29, 2001 was a profound loss for WSU Vancouver and the community. Lori cannot be replaced, but we believe her ability to inspire can live on.