Titan VanCoug Put on a Show

Steve Sylvester claims he did everything wrong in the cultivation of his rare corpse flower named Titan VanCoug. Nevertheless, the plant persisted.

It all started with a seed

Steve Sylvester, associate professor of molecular biosciences, planted a seed from the University of Wisconsin-Madison’s titan arum (Amorphophallus titanium), affectionately named Big Bucky, in 2002. He subscribes to a daily science blog where he saw seeds offered. Big Bucky’s bloom attracted thousands of people to campus. Sylvester hoped he could do the same for WSU Vancouver.

“I came to WSU Vancouver from WSU Pullman in 1996, the year the Salmon Creek campus opened,” said Sylvester. “I got tired of people not knowing WSU Vancouver was here and that we are an R1 research university. I thought a corpse flower bloom would provide an opportunity for people to learn about us.”

All kinds of wrong 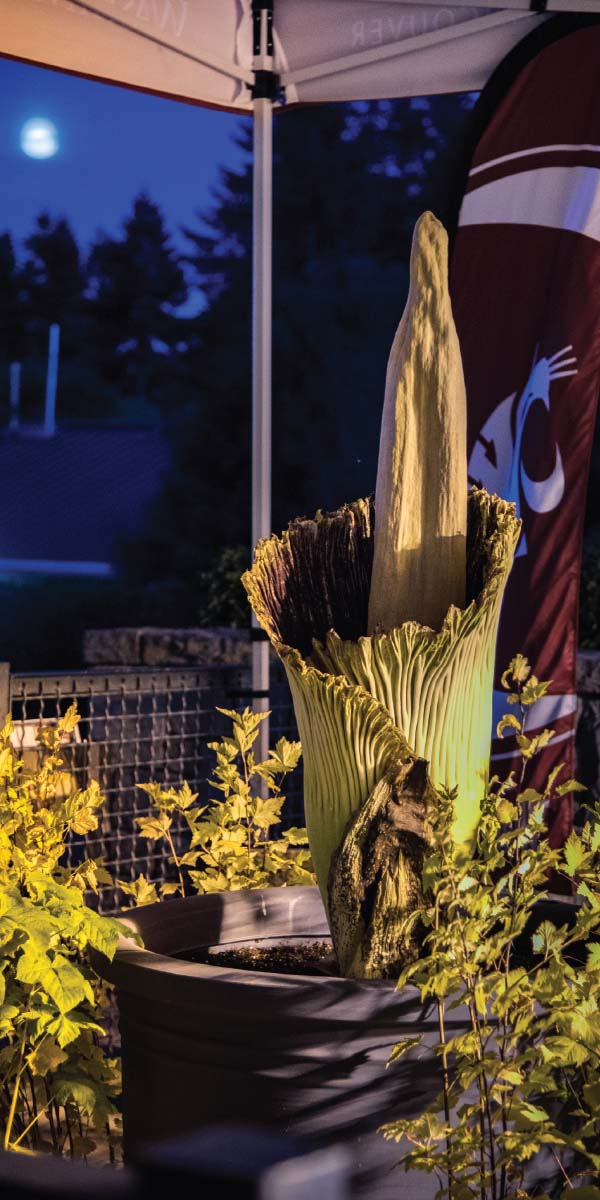 Despite less than ideal conditions, the plant sent up a leaf that was about a foot tall. Sylvester was pretty pleased with himself, until the leaf died. “I thought, oh nuts, I killed the darn thing,” he said. But soon another leaf poked out of the soil and that one grew to be a foot-and-a-half tall.

Sylvester soon learned the rhythm of the plant. It sends up a leaf, which eventually dies back, directing energy to the corm (tuber) in preparation for a bloom. It rests dormant for a few months, then it sends up another leaf taller than the one before.

“When Titan VanCoug moved to the hallway, its leaf was dying back,” said Sylvester. “A well-meaning person assumed I was not watering the plant properly and they overwatered it. The leaf literally exploded one night, throwing sap against the wall.”

Sylvester thought that was surely the end for Titan VanCoug. Then a funny thing happened. Four leaves poked out of the soil. The explosion was so fierce, the corm split into four pieces, essentially creating four plants in the same pot.

The explosion set Titan VanCoug’s bloom clock back, but the plant regained its rhythm, sending up leaves, each one larger than the first. Eventually it grew too tall for the hallway and was moved to the stairwell in the Science and Engineering Building. The last leaf before the bloom was 14 feet tall and about 7 inches in circumference at its base.

On June 1 Sylvester noticed two sprouts poking out of Titan VanCoug’s pot. One of them looked a little plumper and had a ridge Sylvester had not observed in the past. Could it be a bloom, he wondered?

Having been fooled by this plant in the past, Sylvester continued regular care of the plant. In fact, he had just received a gift of a larger pot from the Rotary Club of Vancouver Sunrise and went ahead with his plan to repot.

On June 20, with the help of Facilities Operations, Sylvester repotted Titan VanCoug. He guessed the corpse flower and its surrounding soil weighed about 350 pounds. A forklift was used to suspend the corpse flower while Sylvester cut away the confining old pot. Then it was gingerly lowered into its bigger pot, and Sylvester tucked in fresh soil.

After repotting, Sylvester left the plant outdoors. In the coming days there was thunder, lightning, heavy rain and lower than average temperatures. “I was afraid the bloom had aborted,” Sylvester said. But two days later Titan VanCoug had grown, it was then obvious it was a bloom, not a leaf, and it continued to grow about two inches a day.

The countdown to bloom

Sylvester predicted Titan VanCoug would bloom at the end of July or beginning of August. He measured the plant daily, and learned that titan arum typically stops growing and begins to show purple inside its spathe about four days before a bloom.

On the morning of July 15, Sylvester measured Titan VanCoug and checked its condition. “Monday: We have beaten the 4-foot mark at 48 ¾ inches,” he said. “I thought I saw some purple micro spots inside the lip of the spathe. We may be getting to the less-than-a-week period.”

Sylvester was at home on his riding mower at 8 p.m. July 15 when his wife noticed his phone was getting multiple calls and text messages in quick succession. She flagged Sylvester down and handed him his phone. “It’s blooming!” he said.

Sylvester raced back to campus, and there under an almost-full waxing gibbous moon, Titan VanCoug was in full bloom.

It took almost no time for the word to spread. Neighbors and others nearby came to campus to see and smell Titan VanCoug’s bloom. Onlookers came and went until 3 a.m. July 16. By 4:30 a.m., television reporters and cameras arrived eager to share the bloom with morning news audiences. “It stinks,” said Christine Pitawanich, KGW reporter. “See it and smell it for yourself.”

And they did. Between 8 a.m. and 11 p.m. thousands of people flocked to campus and stood in line up to two hours to get a glimpse, a whiff and a selfie with the now famous Titan VanCoug.

“It is indeed impressive in scale and scent.”

“It looks like it belongs on a Star Trek set.”

“It smells like the fish market pier at Garibaldi.”

Sylvester stayed with Titan VanCoug almost nonstop from the bloom until guests trickled away by the week’s end. He shared information about titan arum, Titan VanCoug, and WSU Vancouver and its research mission. His throat got dry and his tongue swelled, but he greeted each onlooker with the same enthusiasm.

“I guess it worked,” a weary Sylvester said. He polled people crowded around Titan VanCoug asking how many had never been to campus. “Eighty to ninety percent had never been here before,” he said.

Waiting for the next bloom

The second largest of the four titan arums in Sylvester’s pot could bloom in a matter of months. The next two are probably two years out. Titan VanCoug will likely take a four-year hiatus between blooms. 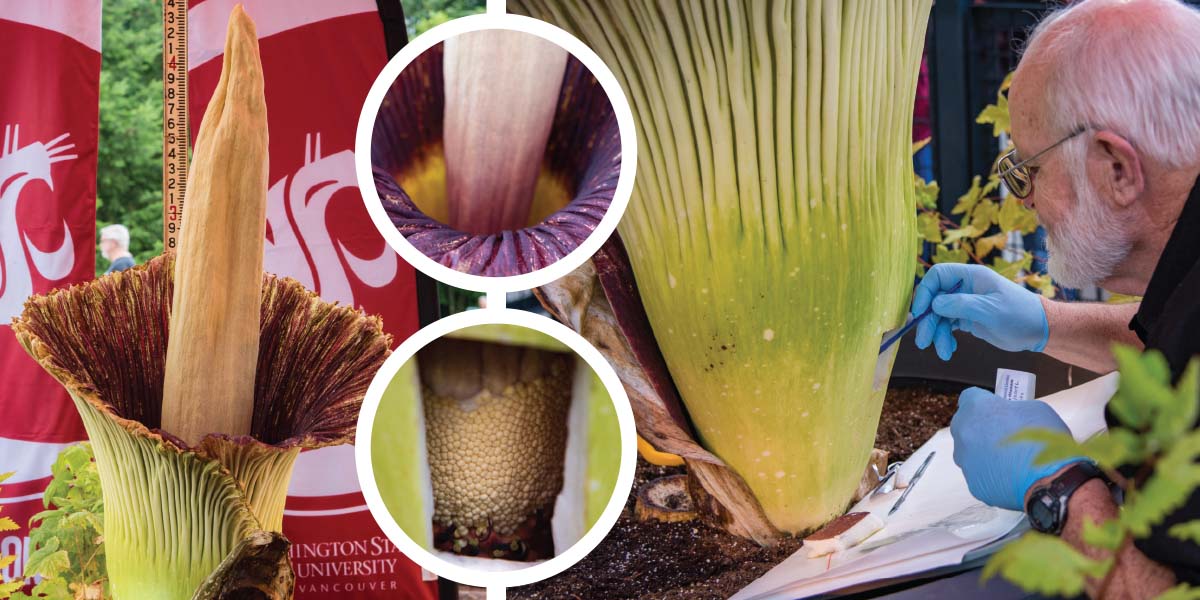 Sylvester was able to get pollen from a titan arum that bloomed in New York in June. He carefully cut a window in the back of Titan VanCoug and pollinated the rings of red female flowers contained within using a sterile paint brush. In a few months, Sylvester hopes to have viable seeds he can share with other universities, conservancies and botanical gardens. ■ 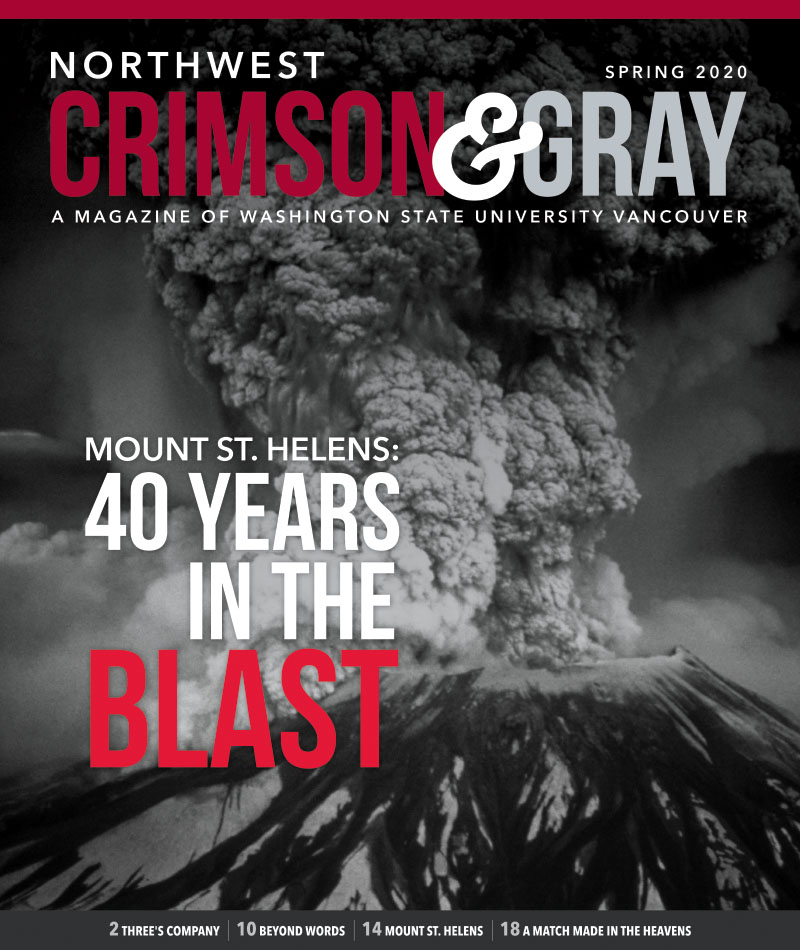