How to Get Things Done 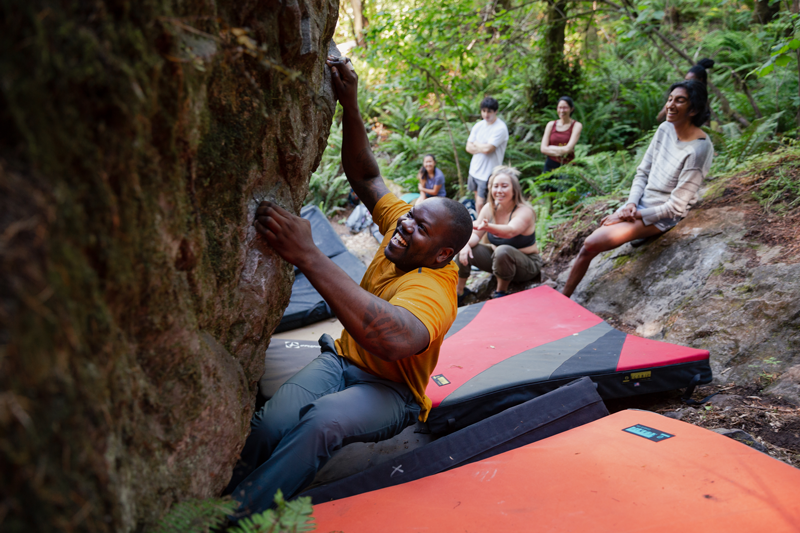 In June 2020, on the yearly Black Liberation bike ride to celebrate the Juneteenth holiday, Rikeem Sholes chanced to meet Deepti Singh, faculty member in the School of the Environment at WSU Vancouver. Sholes, a fish biologist at the U.S. Fish & Wildlife Service in Vancouver, Wash., was thinking about graduate school at the University of Michigan at the time but didn’t want to leave the Pacific Northwest. Singh told him he could get his Ph.D. in science right in his own backyard—WSU Vancouver. And as it turned out, there is a scientist at WSU Vancouver—Allison Coffin, associate professor of neuroscience—who had experience in the same line of research that Sholes wanted to study, namely the sensory systems of salmon.

Coffin was thrilled to meet Sholes and offer him a place in her lab. Two concerns remained: How would his living expenses be covered? And what about tuition?

Enter Janine Castro. She holds a position a few steps above Sholes at the U.S. Fish & Wildlife Service. Coffin knew her, because Castro and Coffin had co-founded Science Talk, a professional society for science communicators. Castro said yes, Sholes could continue earning a salary while working part-time and studying for a Ph.D. that would make him even better at his job. That took care of living expenses.

WSU Vancouver covered his tuition for his first semester, spring 2021, and Coffin threw herself into helping Sholes with tuition after that. She coached him as he applied for scholarships, including a major national scholarship from the Pat Tillman Foundation. The foundation, which honors the former NFL player turned Army ranger who died in Afghanistan, has offered up to 60 scholarships annually since 2009 to military members, veterans and their spouses. Only one WSU student, Scott Davis, an Army veteran in the Elson S. Floyd College of Medicine, had received this prestigious scholarship. No one from WSU Vancouver has ever gotten one—until now, when Sholes, a Navy veteran, did.

“The scholarship covers tuition,” Coffin said. “That was the last piece.”

Jack of all trades

Sholes grew up in a military family in New Orleans. As a kid, he got hooked on aquatic documentaries. He joined the Navy right out of high school, trained for two years in South Carolina, then spent two years in San Diego as a nuclear mechanic on the U.S.S. Nimitz. With the G.I. bill, he started college, first at the University of Oregon, then Louisiana State University, where, thanks to lower-cost resident tuition, he completed his bachelor’s degree in marine biology in 2011—the first in his family to earn a bachelor’s degree. He spent the next five years in various jobs in his field in Alaska, Colorado, Hawaii, Nevada and Oregon, until landing at the U.S. Fish & Wildlife Service in Vancouver. He studies fish populations and habitat—work he has described as “using electronics to spy on fish.”

All along, he was making connections and learning from colleagues. He acquired a solid working knowledge of the fishing industry, electronic monitoring techniques, wildlife, computer programming and security, regulatory systems, bird habitats, invasive plant species and habitat restoration, among other things. “I worked with super-smart programmers and coders, and through osmosis I learned from them,” Sholes said. “If you’re interested in listening to people nerd out about their thing, you learn things.”

He also got further education online, earning a Master of Science degree in environmental policy and management from the University of Denver, and three computer security certifications.

Sholes considers himself a jack of all trades. “I can do a lot of things—but I’m never going to do them all great,” he said. “Now I can start to focus.”

Thanks to his work, Sholes has become an outdoors enthusiast, and he has a mission to give other people of color an opportunity to enjoy the outdoors too. He operates two Facebook groups: PDX Climbers of Color and Portland POC Hikes, each with more than 800 members. “I didn’t grow up being outside,” he said. “I felt we needed to do something to get people outside—they’re missing a source of joy and recreation.”

He started hiking locally to meet people—and now takes pride in helping other people meet people. “It makes me happy if I go to an event and see people I know, or if I’m on somebody’s social media page and see people going on a hike, or making a business deal, and I know they made that connection while on a hike with me,” he said.

Sholes obtained grants for each group from Metro, the regional governing organization, to buy outdoor equipment that novices can borrow, such as backpacks and water filters for the hikers, helmets and harnesses for the climbers, helping eliminate a barrier that can keep people from participating in outdoor recreation.

Coffin mentions that Sholes also visits K-12 classrooms in the Vancouver/Portland area to talk to kids about his career as a scientist. “He’s passionate about being a role model for the next generation,” Coffin said.

Only recently has Sholes become comfortable with the term “role model.” “I kind of got thrust into this role,” he said. “The Portland area has a need, specifically, for BIPOC leadership. There’s not much diversity for the size of the city. So when that void is there, it’s critical for people to step up and be the face of something.”

As an avid reader, Sholes was excited when he came across a scratch off poster called “100 Books You Should Read Before You Die.” He quickly realized that the majority of the books on the poster had been written by White American or European authors. Sholes was inspired to fill this void and further advance the conversations, the education and the understanding of the Black experience in America. This led him to create his own poster, “100 Books by Black Authors,” to highlight classic and contemporary works of Black American literature of importance. “My biggest goal was to give people a tangible roadmap of Black American culture and I think if a person can make it through all 100 of these books, they'll gain some perspective of the culture as a whole,” said Sholes.

Sholes is studying ways to improve conditions at salmon hatcheries so fish are better able to survive once released into local streams. Hatcheries negatively affect salmon’s sensory systems, making it harder to avoid predators, find food and otherwise detect their environment. Coffin has previously studied hearing in salmon and intends to continue that research.

Working with Alli [Coffin] specifically, it just ended up working out,” Sholes said. “We found a perfect overlap of Fish & Wildlife’s interests and her previous research. We’re all going to get a lot out of it.”

While becoming better at his job was Sholes’s primary motivation, he has an underlying motivation as well—to make his parents proud and show other people of color what they too can accomplish. “My parents were born at a time where they couldn’t even go to most of the schools in our city,” he said. “So it’s a big deal to have someone one or two generations away who can say I’m a Ph.D.—even though they have no idea what I do. I swear they think I work at an aquarium.”

Through his graduate research, Sholes also intends to take full advantage of learning new ways to get things done—and bring them back to his job. “I would love for us to be able to gather data effectively that is economical and has impact,” he said. “The connections I make in these years will last a lifetime. And I think having some people who have inroads to academia, who have these connections, will benefit not only me but also the government as a whole.”