The Students’ Award for Teaching Excellence recognizes a faculty member who commits time outside of the classroom to prevent students from falling through the cracks, demonstrates an enthusiasm for the subject matter, and instills enthusiasm and passion in students. 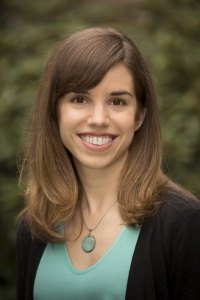 Andra Chastain may ask a lot of her students, but she gives even more than she asks. In nominating her for the teaching award, a student praised her “desire and commitment to help students succeed” and her willingness to be available whenever a student needs her. “She inspires and helps encourage me as a researcher to dig deeper, think harder and aim beyond what I thought possible,” the nominator added.

Chastain teaches introductory and advanced history classes. Her research and teaching interests include modern Latin America, with a focus on Chile in a global context; the transnational history of aid and development; the global Cold War; urban and environmental history; and the history of science and technology. Her broad curiosity creates excitement in the classroom and an uncommon ability to make students fall in love with history. “I want students to see how knowledge about the past is dynamic and contested—and has serious implications for the present,” she said.

She encourages students to speak up, and her classes are lively with discussion. “I love the opportunity to build a sense of community in my classroom,” she said. “We establish a culture of respectful dialogue from the start.”

Chastain believes in setting high expectations, communicating them clearly then showing how they are attainable. She is honest about the challenges of the research and writing process. “I know from experience that if a goal seems impossible, procrastination and guilt take over,” she said. “But if a seemingly insurmountable project is broken down into small tasks, and you have the support from peers and your professors to achieve these tasks, you can go farther than you had imagined.”

Chastain earned her bachelor’s degree in 2008 from Reed College in Portland, then went on to earn a master’s degree from the University of California Berkeley in 2012, both an M.A. and an M.Phil. from Yale University in 2014; and a Ph.D. from Yale in 2018. She has been teaching at WSU Vancouver ever since. She is currently revising her dissertation into a book about the history of the metro system in Santiago, Chile.

While she loves sharing her passions with students, she gains a lot from them too. “I guide the ship, but we are all learning together,” she said. “Their questions provide a foundation for a lively conversation in class—and the process of creating knowledge is all about keeping that conversation going.”